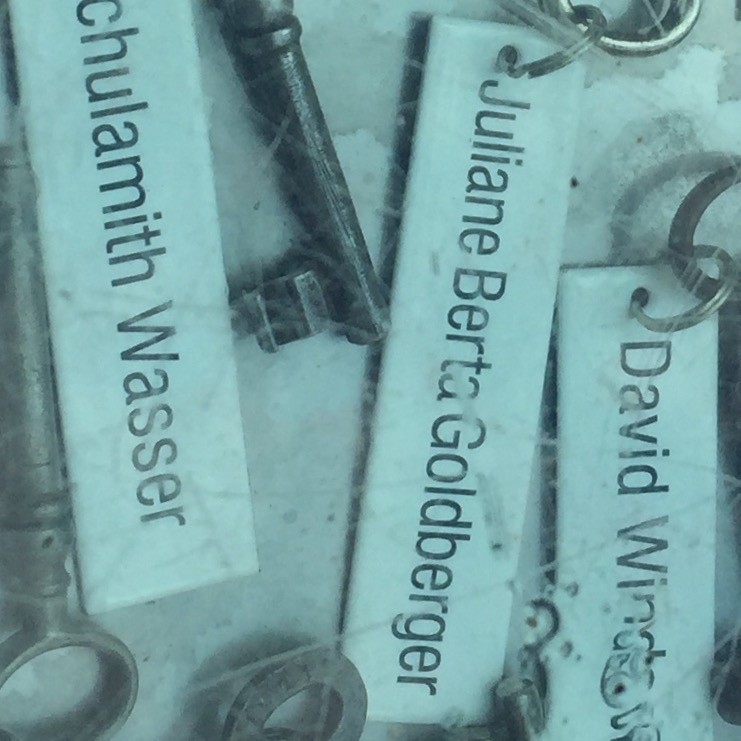 My husband’s mother, Jane Goldberger Miller, and his grandparents, Helene and Ernst Goldberger, left Vienna following the Anschluss in 1938. Before going on a trip to Budapest and Vienna, a trip designed for Jewish Federation professionals to learn more about the work of the Jewish Agency for Israel and the American Jewish Joint Distribution Committee there (which I talk about here), I asked my mother-in-law to provide me with the address of her house in Vienna. What I didn’t anticipate was how beschert this trip would become. 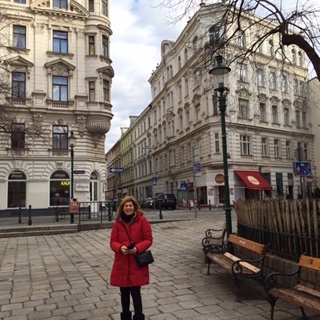 The tour guide offered to take me to my mother-in-law’s house at the conclusion of my trip. Ironically it happened to be in the very neighborhood where the guide lives. During the visit to this beautiful neighborhood, I was able to imagine the kind of life my mother-in-law and her family must have had in this elegant city of art, music, and culture. I saw the school she attended, just around the corner from her home, and I sat in the hundred-year-old Viennese coffee house right across the street from her home, drinking delicious coffee and eating cream-filled pastries with our guide.

The neighborhood was really beautiful and charming, and the outside of her house reminded me of the house featured in the movie, Woman in Gold. Apparently most of the residents who lived here prior to the war were Jewish. Sigmund Freud had lived right around the corner from her house. 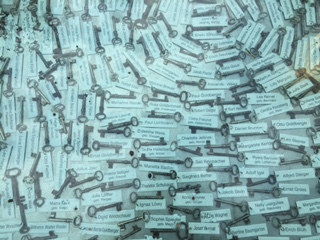 Directly across from my mother-in-law’s home was a beautiful memorial to the many Jewish residents who had lived here. It consisted of house keys with the individual names of those who once lived in these buildings. The memorial was covered in glass and placed beneath the street.

The day before I visited my mother-in-law’s home, I visited the Jewish Museum Vienna as part of the tour. It’s a relatively new museum filled with the typical artifacts of Jewish museums throughout post-Holocaust Europe. Afterwards, I browsed the gift shop. After looking at several options—Judaica, a multitude of different books, artwork, and so on, I ended up buying a gift for my mother-in-law.

It was a book called The Jews of Vienna in the 20th Century. The 350-page book is filled with black and white photos of Viennese Jews of the twentieth century and I thought she would like looking at the photos, and— who knows—may even know someone in the photos. 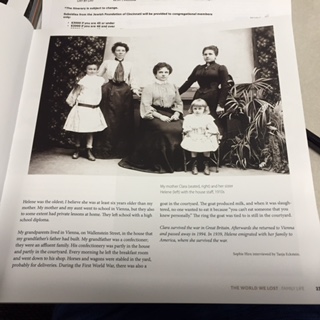 I got on the bus. While sitting I decided I would look at the photos in the book. I randomly opened it and turned directly to a page containing a picture of a woman of around twenty, standing upright in a convertible Volkswagen. On second glance I saw that she looked just like my mother-in-law—it was definitely her face! Reading the caption, I discovered I was actually staring at a photo of my mother-in-law’s mother, my husband’s grandmother. The description listed: Helene Goldberger (my husband’s grandmother) and Helene’s sister- and brother-in-law (my mother-in-law’s aunt and uncle). I stared at the page for a long time. I could not get over it!

I honestly don’t know what to make of all of this. I still cannot get over it. How is it that while on a trip to Vienna, I found this book among hundreds of books, turned to this particular page among hundreds of pages, only to discover photos of my husband’s family in Vienna? The explanation I receive from many is that it was beschert.

Now, I get the meaning of that word, beschert, and the concept, too; but can you tell me—what in the end, does that actually mean?

Upon my return I could not wait to visit my mother-in-law to give her the book. She had no idea that these photos ever existed nor that her family was published in a book. She stared at them for quite some time; and read the captions written about her family—her mother, her aunt, and her uncle. She was thrilled that I had found this book and maybe even more thrilled that I had taken the time to travel to her childhood home. In her usual modest way, she told me over and over how much she appreciated my taking the time to do this, how much it meant to her and to my father-in-law as well. She also found another photo in the book of my husband’s grandmother and great aunt as children.

I realized at that moment just how lucky I am to have my in-laws. They are 91 and 93 years old, vibrant and healthy, loving and kind. They have been married for 65 years this month and their love and support for one another and for their children and grandchildren is exceptional. I realized how lucky I am that they were able to escape from the Nazis. And yet while I saw all they had left behind and how the course of history impacted their lives and mine, I also realized that I would not have had my husband and my children if they hadn’t left when they did.

I guess life really is full of bescherts. And although I don’t think we ever get the full meaning of why things happen and turn out the way they do, we can know that life certainly works in strange and mysterious ways.