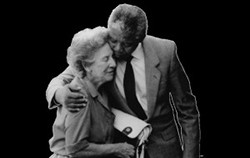 Helen Suzman (1917-2009), the iconic South African leader who devoted her life to the fight against apartheid, is the focus of a graphic panel exhibition Helen Suzman: Fighter for Human Rights, opening Thursday, October 22 at the Skirball Museum on the historic campus of Hebrew Union College-Jewish Institute of Religion (HUC-JIR) in Clifton. The opening is one of several events commemorating the 140th anniversary of the founding of the college in 1875. Read more