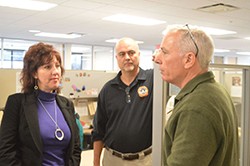 At Safe Cincinnati, the safety and security of our community is a top priority. We were honored to be featured in this Cleveland Jewish News article, which highlights how we are working collaboratively across the region to be proactive about security.

We’re also proud to announce that we’re leading the way among other Jewish communities with a new, innovative, tool that will work to proactively safeguard our community. We've made it easier than ever to efficiently report suspicious activity anywhere in Cincinnati’s Jewish community, right from the palm of your hand. Our new Suspicious Activity Reporting Tool, which can be found at www.safecincinnati.org, provides anyone with a smartphone or desktop computer the ability to quickly send a note to Safe Cincinnati personnel about something suspicious. The digital “ tool" includes functionality which allows a user to instantaneously take and attach pictures of what’s in question, as well.

It wasn’t your ordinary day at Jewish Federation of Cleveland headquarters.

At 9:47 in the morning April 10, (fake) gunfire went off as an assortment of local and federal law enforcement practiced their response to a hypothetical attack.

In so doing, the Jewish Federation of Cleveland became the first faith-based organization to participate in such a training program, according to organizers. More >