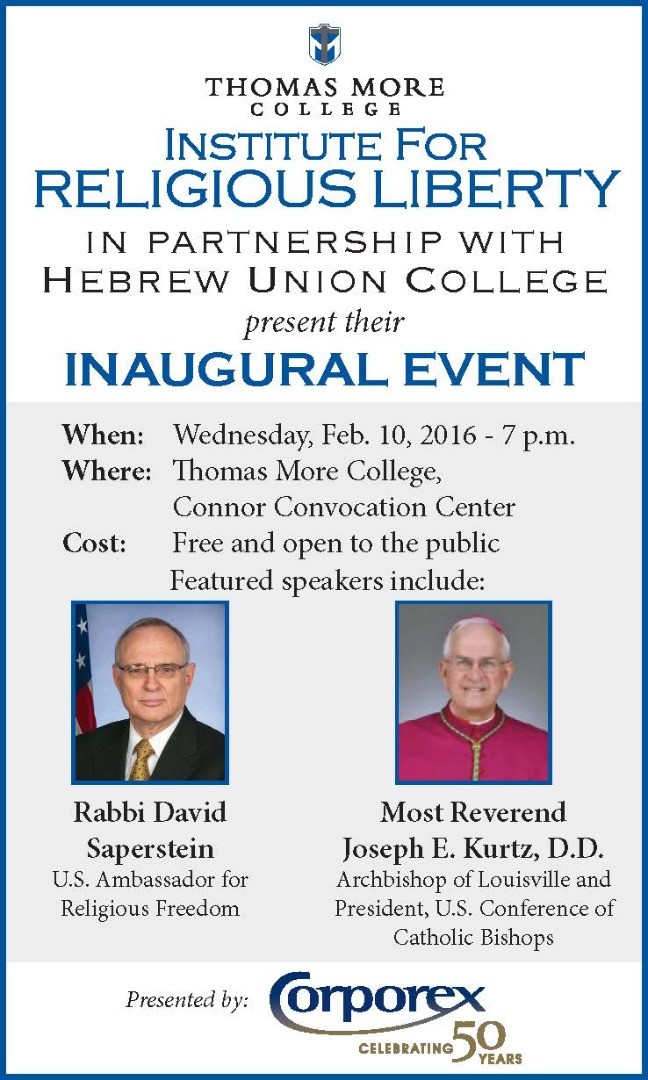 Thomas More College will be holding an event (on their campus) focusing on the American Concept of Religious Freedom. Hebrew Union College will be co-sponsoring this event. The program will begin at 7:00 p.m. and conclude by 9:00-9:30 p.m.

Thomas More College in Crestview Hills, Kentucky has announced the formation of the Institute for Religious Liberty. The Institute’s mission is to advance the American concept of religious freedom as an inalienable right and its protection for all people.

The Institute will sponsor an Inaugural public program featuring two prominent thought leaders who will discuss the American concept of religious freedom.  The Feb. 10, 2016 program at Thomas More College (7:00 p.m.) will feature the President of the United States Conference of Bishops, the Most Reverend Joseph E. Kurtz, D.D., Archbishop of Louisville, and the U.S. Ambassador for Religious Freedom, Rabbi David Saperstein, as speakers.  The event is FREE and open to the public.

“The genesis for the Institute came about as several local business leaders from various religious backgrounds gathered to discuss the need to celebrate and educate others about our Constitutional privilege to practice our religion and worship as we see fit,” said Thomas More College President David Armstrong.  “There is no better place to advance and explore that inalienable right than here on our campus as we challenge our students of all faiths to examine the ultimate meaning of life, their place in the world, and their responsibility to others.  ”

“In light of contemporary events that capture the headlines daily, it is difficult to identify a more salient and timely subject to explore in a forum of this sort,” said Dr. Gary P. Zola, Executive Director of the Jacob Rader Marcus Center of the American Jewish Archives and and the Edward M. Ackerman Family Distinguished Professor of the American Jewish Experience & Reform Jewish History at Hebrew Union College in Cincinnati. Dr. Zola represents Hebrew Union College on the new Institute’s steering committee.