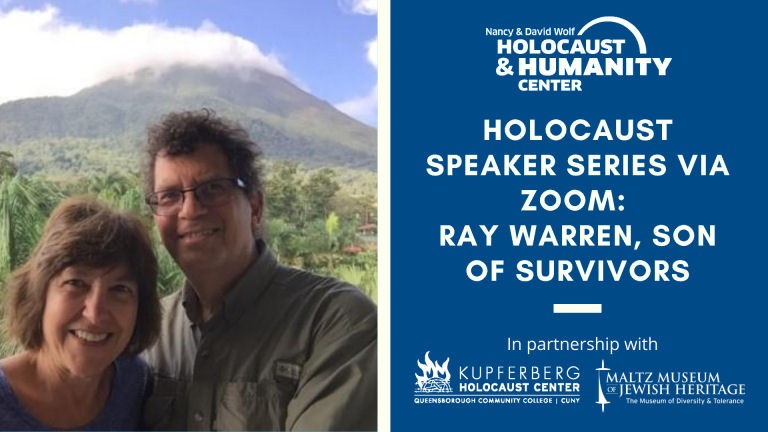 The Holocaust Speaker Series, held each Wednesday at 11:00 am, features Holocaust survivors and descendants of survivors sharing stories of life before, during, and after the Holocaust. Join us on Wednesday, February 2 at 11:00 am via Zoom with Ray Warren.

Ray Warren tells the inspirational story of his mother and father, both Holocaust survivors. Ray’s mother, Fannie, was born in the small town of Zwolen, Poland in 1916. Her father was a merchant, and his store building also served as the family’s house. In 1940, Fannie got married. Both she and her husband were sent to labor camps in late 1942. Fannie went through several labor camps, including Policzna (a farm) and Skarzysko (an ammunition plant), before being sent to Bergen-Belsen in the winter of 1944. British liberators arrived on April 15, 1945. Of her family, only she and her brother Chaim survived. Fannie remarried to Max in 1947, and immigrated to the U.S. in 1949. Ray’s father, Max, was born in the city of Lodz, Poland in 1905. He was married in 1935. He was sent for labor in Eastern Poland and later to Siberia in Russia. Of his family, only a nephew, Ray, survived the war. They were reunited several years after the war ended.