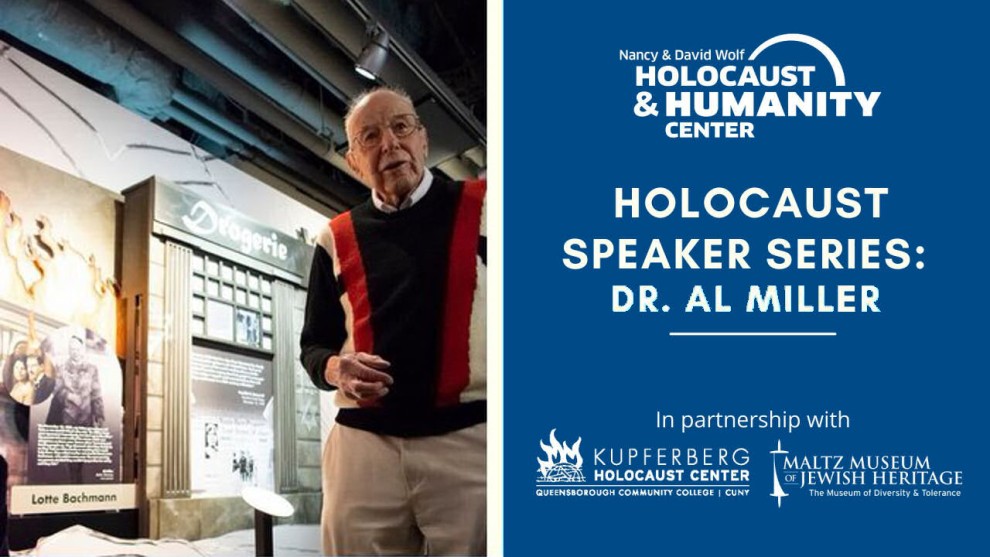 The Holocaust Speaker Series, held each Wednesday at 11:00 am, features Holocaust survivors and descendants of survivors sharing stories of life before, during, and after the Holocaust. Join us on Wednesday, November 10 at 11:00 am via Zoom with Al Miller.

Dr. Al Miller was born in Berlin, Germany in 1922. His family owned a successful shirt factory for sixty years, and he has many happy memories of his early childhood. As an active youth, he enjoyed sports until one day he arrived at his favorite recreation center to find it forbidden to Jews. He also was an enthusiastic student. He remembers many of his childhood friends joining the Hitler Youth and wearing their uniforms with pride and cutting him out of their lives for being Jewish. He was the last Jewish student to remain in his class until it was made too uncomfortable for him to stay. In 1936, Al attended the infamous Berlin Olympics in which American runner Jesse Owens won four medals. As conditions became worse for the Jews of Germany, his family put together a plan to leave the country and resettle elsewhere. Al departed Nazi Germany in 1937 for Switzerland, while his brother was sent to England. His parents were forced to remain in Berlin because their exit papers had been confiscated by the Gestapo (secret police). They witnessed Kristallnacht and were hidden in a friend’s home. The family was eventually reunited in England before immigrating to America in 1939. Al served in the US Army from 1943-1946. Because of his ability to speak German, he was trained in intelligence at Fort Ritchie in Maryland and then sent back to Germany to interrogate suspected war criminals after the war’s end in 1945. He was honorably discharged from the military in 1946. Al later settled in Hamilton, Ohio, where he practiced optometry until his retirement.