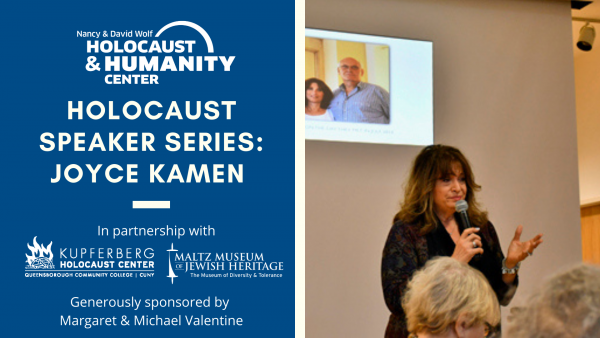 The Holocaust Speaker Series, held each Wednesday at 11:00 am, features Holocaust survivors and descendants of survivors sharing stories of life before, during, and after the Holocaust. Join us on Wednesday, October 6 at 11:00 am via Zoom for Joyce Kamen.

Joyce, a semi-retired creative communications professional, conducted video interviews of nearly 40 of Cincinnati’s Holocaust survivors for the “Project Eternity” series, commissioned in the 1990s by Cincinnati’s Combined Generations of the Holocaust. In 1995, her Emmy award-winning documentary, “Because They Were Jews: Cincinnati Survivors of the Holocaust Remember,” was syndicated by PBS.

Joyce tells the remarkable story of the extraordinary personal journey that she and her husband Fred have experienced since discovering in 2013 that Fred, who was adopted at birth, was the biological son of two Holocaust survivors. His mother Anna - then only 19 - was living in Nazi-occupied Berlin when the war broke out. She was saved by a courageous Egyptian doctor. For over two years - and at great risk to his own life -  Dr. Mohammed Helmy contrived an elaborate series of schemes to keep Anna from being deported to Auschwitz-Birkenau.