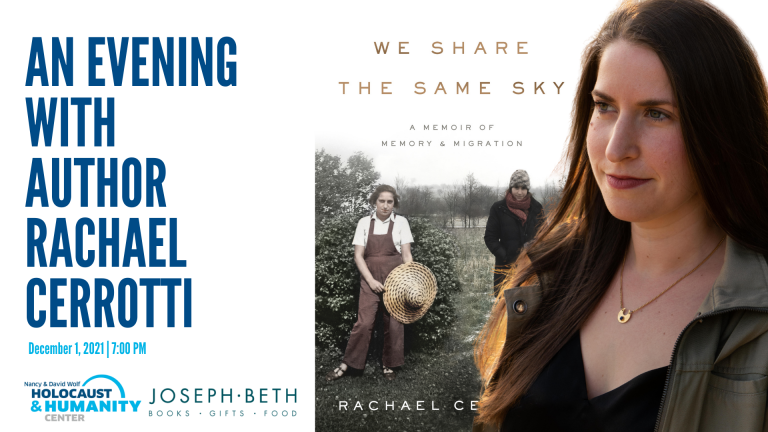 Join the Nancy & David Wolf Holocaust & Humanity Center and Joseph-Beth Booksellers for a special evening with author Rachael Cerrotti. Rachael will join us for a discussion about her memoir, We Share the Same Sky. In 2009, Rachael Cerrotti, a college student pursuing a career in photojournalism, asked her grandmother, Hana, if she could record her story. Rachael knew that her grandmother was a Holocaust survivor and the only one in her family alive at the end of the war. Rachael also knew that she survived because of the kindness of strangers. It wasn’t a secret. Hana spoke about her history publicly and regularly. But, Rachael wanted to document it as only a granddaughter could. So, that’s what they did: Hana talked and Rachael wrote. The memoir weaves together the stories of these two women—Hana as a refugee who remains one step ahead of the Nazis at every turn, and Rachael, whose insatiable curiosity to touch the past guides her into the lives of countless strangers, bringing her love and tragic loss. Throughout the course of her twenties, Hana’s history becomes a guidebook for Rachael in how to live a life empowered by grief.

Books will be available for purchase during this special event hosted at Joseph-Beth Booksellers in Rookwood. PRE-ORDER THE BOOK TODAY.

Rachael Cerrotti is an award-winning photographer, writer, educator, and audio producer as well as the inaugural Storyteller in Residence for USC Shoah Foundation. For over a decade, she has been retracing her grandmother’s Holocaust survival story and documenting the echoes of WWII. In the fall of 2019, she released a narrative podcast, titled We Share The Same Sky, about this story. The show was the first-ever documentary podcast to be based on a Holocaust survivor’s testimony. It was listed as one of the best podcasts of 2019 by HuffPost, as a “Show We Love” by Apple Podcasts, and a “Reader’s Pick” by Vulture Magazine. In addition, it received a literary award from The Missouri Review. The show is now being taught in classrooms worldwide, accompanied by educational resources developed by USC Shoah Foundation’s IWitness and Echoes & Reflections. Rachael’s memoir, also titled We Share The Same Sky, will be published in August 2021 and is now available for pre-order.

Rachael has worked in over a dozen countries; her work has been published and featured by NPR, PRI’s The World, WBUR, GBH, The Washington Post, Times of Israel, BBC and others, as well on podcasts such as Kind World and Israel Story. Rachael is currently producing and co-hosting a new podcast called “The Memory Generation” which digs into USC Shoah Foundation’s Visual History Archive and explores what it means to inherit memory.