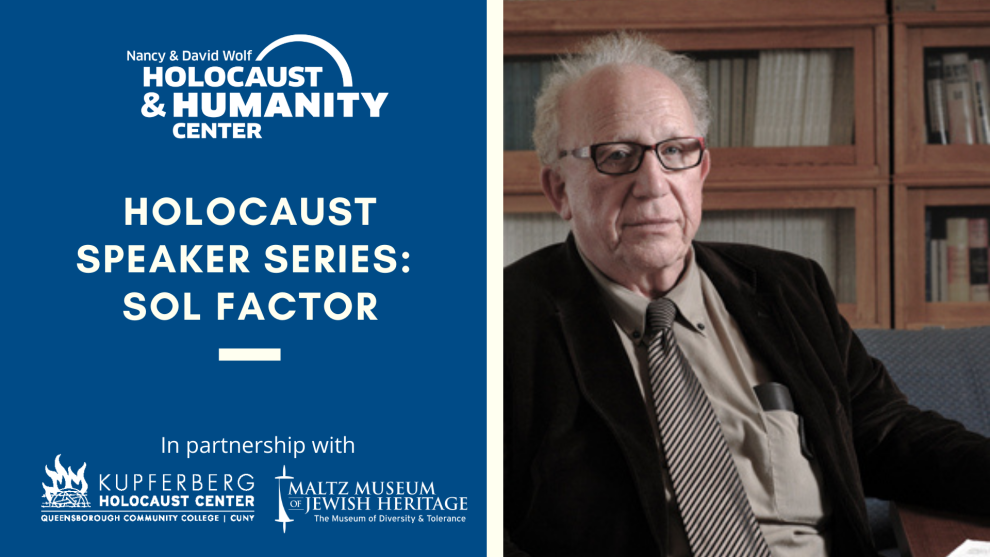 The Holocaust Speaker Series, held each Wednesday at 11:00 am, features Holocaust survivors and descendants of survivors sharing stories of life before, during, and after the Holocaust. Join us on Wednesday, March 24th at 11:00 am via Zoom with Sol Factor.

Mr. Sol Factor was born in a DP Hospital in Munich, Germany in June of 1946. For reasons unknown to him, he was separated from his natural mother two weeks after his birth. He was brought to the United States in 1947 to be adopted. Mr. Factor is a retired history teacher; the last 25 in the Cleveland Heights Schools. Mr. Factor was selected as a Mandel Fellow through the United States Holocaust Memorial Museum in 1998. In that capacity he wrote the teacher guide for the book, Tell Them We Remember. He has also created a teacher guide for the film Hidden-Poland, a video created by the World Federation of Jewish Child Survivors. Mr. Factor has given numerous workshops and talks on the Holocaust in many public schools and universities in Ohio, as well as at conferences throughout the United States. Mr. Factor’s areas of concentration with the Holocaust have been the roles of children during the Holocaust and the period of the DP Camps following the end of World War II. He is a part-time instructor in the Jewish Studies Program at Kent State University.