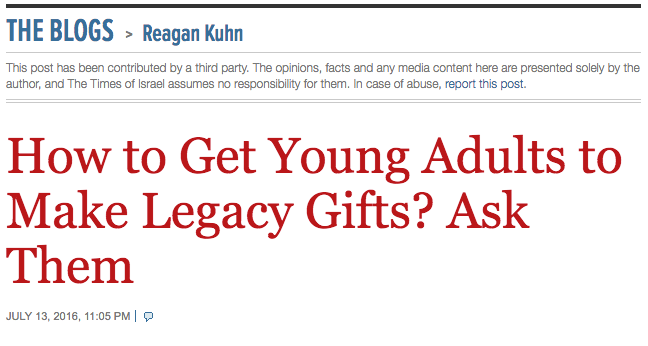 We are so proud that our own Reagan Kuhn, Project Manager at Create Your Jewish Legacy, was published in the Times of Israel today.

Here's what she said:

For years, nonprofits have been talking about the “millennial giving problem,” citing scary statistics involving the decline in annual giving and the generational gap in fundraising. It’s true that young adults as a group present fundraising challenges, but the question is: Are we tapping a dry well, or are we using the wrong tools?

Sure, millennials are unable to donate large sums of money out of pocket. A 2014 study found only 11 percent of all generational giving comes from those aged 18 to 32, compared with 43 percent of all philanthropic contributions coming from baby boomers.

At the Jewish Federation of Cincinnati, we have found a way to tap into the aspirations of this generation as they begin careers, start families, think about schools and navigate other young adult concerns.On the other hand, many experts insist that young adults give—but differently. Another 2014 studyrevealed that 75 percent of young adults gave to a nonprofit—and a whopping 70 percent solicited their friends or family to make donations. These may be smaller donations, but they show that young donors are not the “slacktivists” they are often called. The key seems to be tapping into their passions and truly engaging them. Young donors do not give out of responsibility; they invest out of inspiration, and want to be active and involved.

Begun in September 2014, our Create Your Jewish Legacy (CYJL) program focuses on increasing planned giving and endowments to support the future of the local Jewish community. Planned gifts, sometimes referred to as deferred gifts, can take several forms, the most common being a bequest from a will or a beneficiary designation on a retirement plan or life insurance policy.

Nearly one-third of our legacy commitments have come from donors under 45 years old. This surprised us. For comparison, we looked for national statistics and were surprised to find virtually none for this age group. A 2009 study found that nearly six out of 10 donors aged 30-39 would at least consider making a planned gift—and yet 84 percent have not been approached.

As we participated in seminars, webinars and other trainings for endowment programs, we noticed that planned giving experts don’t even talk about how to approach a donor under 45. Those same presentations note that the main reason why people do not make charitable gifts in their wills or retirement/life insurance plans is because nobody asks.

Someone did ask Ben and Ronna Schneider about a legacy gift when the couple was in their 30s. Almost immediately, they set up a life insurance policy with the Jewish Federation of Cincinnati as beneficiary. It made sense to them. Given their young age, the premiums were low and they saw the potential over the course of their lives. In an interview, they commented, “We talked about it and we thought to ourselves. ‘It’s so easy; why shouldn’t we be doing this?’”

Coming back to those life events young adults are facing—career moves, getting married, having kids, buying a house, building equity—combined with their constraints of current budgets and debt—deferred gifts are a no-brainer. Many of these individuals are writing up their first will (what better time to discuss a planned gift than when they are drafting it!), sending their kids to school (allegiance to their alma mater might be the strongest), setting up life insurance policies or retirement funds. It is the exact right time to discuss a planned gift. Ben and Ronna, for instance, had a young family and were already establishing their financial plans.

Some of our young donors may have been on the receiving end of an endowment. Maybe they received a scholarship for college, or a grant to go to Israel. Those life-changing events are still vivid; they see how they could, in turn, have an impact on another person’s life—even if that may be well into the future. Other donors have young children, and the question of transmitting values and the power of community is virtually a part of their everyday thought process. We talk with them about investing in future generations (the ones they are watching grow, in front of their eyes) and creating lasting impact.

These legacy conversations fall within a broader effort by our Young Adult Division to engage young adults through leadership opportunities, networking events, peer-to-peer conversations and other activities. We have built a cohort of volunteers who have been instrumental in securing legacy gift commitments from their peers.

Yes, it is increasingly challenging to reach young adults—and particularly, to forge a lasting relationship between them and an institution. Drawn to causes, rather than organizations, this generation longs for a deeper connection and greater (tangible) impact. But it’s also true that if you talk to young adults about legacy, and they are willing to make a legacy gift, you are creating a bond that—like their legacy—will be everlasting.

This article is co-authored by David Harris, who, together with Reagan Kuhn, manages Create Your Jewish Legacy, at the Jewish Federation of Cincinnati, in partnership with the Harold Grinspoon Foundation’s LIFE&LEGACY program, supporting communities’ efforts to build sustainable Jewish communities for tomorrow’s future.