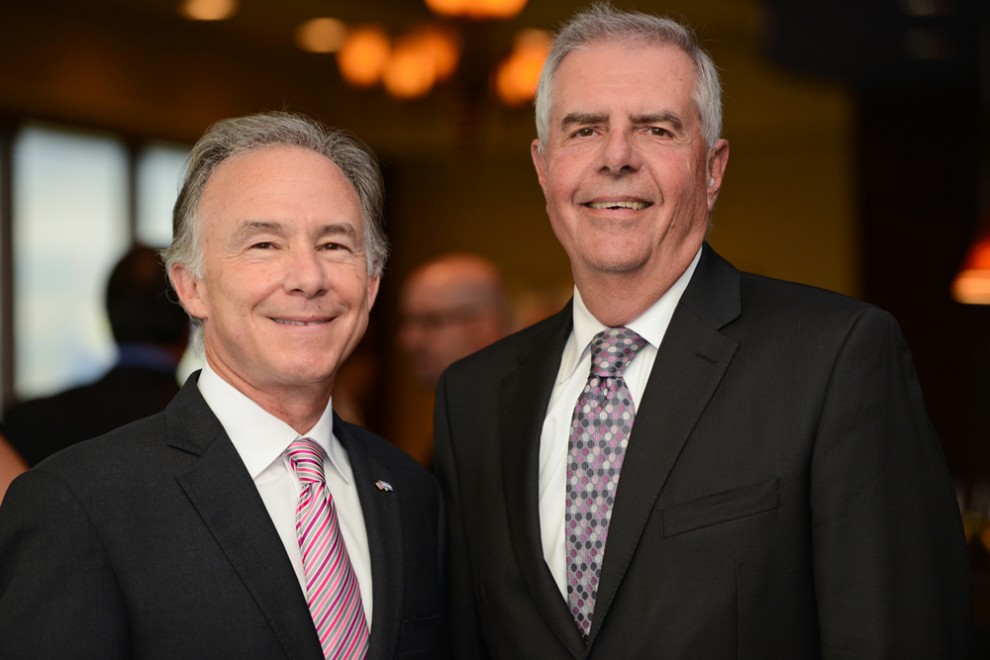 The Jewish Federation of Cincinnati’s 2015 Community Campaign launches this week, with Marty Hiudt and Jay Price as the Campaign Co-Chairs. The Campaign raises money that is then distributed—through a collaborative, volunteer-driven process—to programs that help people in Cincinnati, in Israel, and throughout the world. Hiudt and Price began their terms as Co-Chairs in October.

With many relying on the Campaign for needed funding, Hiudt and Price are leading the charge to raise $5.7 million. They are committed to a successful Campaign.

Hiudt is looking forward to the task. “I am very excited and optimistic regarding the kickoff and early momentum of the 2015 Campaign,” he said. “We have assembled a fabulous team of lay people to both lead and participate in the Campaign. Along with the Federation professional staff, these volunteers are committed to doing the important work of raising funds that are much needed.”

Price emphasizes both the opportunity and the need this year. “I’m really looking forward to a great Campaign for 2015, with the strong economy and strong stock market. And yet, despite these strengths, the needs in the community are greater than ever.”

Both bring formidable histories of community involvement. Marty Hiudt has served on the board of Adath Israel, and is currently on the religious services committee and head usher for the High Holidays there. He serves on the board and the executive committee of the Mayerson JCC, and on the Federation's board. He has been a Campaign solicitor for many years.

“Marty has already taught us so much about the importance of showing our heart when asking the community to donate to the Campaign,” said Suzette Fisher, President of the board of the Jewish Federation. “He is the king of a good metaphor and a good story that makes the need to give imperative.”

Price is currently on the boards of Cincinnati Hillel and the Jewish Cemeteries of Greater Cincinnati, and is Vice President of Development on the Jewish Federation board. He has been President of Jewish Family Service, of The Valley Temple, and of the Cincinnati chapter of the American Jewish Committee. He has also chaired the board at Cedar Village.

“Jay understands community, collaboration, and the dollars needed to have a vibrant Jewish community,” commented Fisher. “I am grateful for his wisdom, his knowledge, and his commitment to our Jewish community. He is a great partner and a wonderful leader.”

Price set three goals for the Campaign: make the $5.7 million mark, encourage supplemental giving, and support the work of Cincinnati’s new community program for legacy giving, Create Your Jewish Legacy. He adds, “The collaboration in the Jewish community among Jewish Federation, Jewish Foundation, Jewish agencies, and the temples and synagogues is stronger than it has ever been. That means the impact of each dollar raised is greater than it’s ever been.”

Commenting on why he is involved in Federation, Hiudt said, “For me it is simple—the community has the need, and I have the commitment, and energy, to do all I can to help assure that my children—really all Jewish people in Cincinnati—have a vibrant Jewish community in which to live, to raise our families and grandchildren. I strongly believe that the Federation is key for all of us to support in meeting the needs of, and strengthening, Jewish Cincinnati.”

The Jewish Foundation of Cincinnati will again match two-to-one all new and increased portions of gifts to the Campaign. This means, for example, that a new gift of $100 will result in a total impact of $300.